How does one tell if passports and visa documents are genuine?

Passports and visa documents have many built in security features. However only the immigration authorities who have the equipment can verify these documents. You and I have no means of knowing if the document is genuine. That makes it a target for identity theft. What if there is a simple solution to make it easy for anyone to verify such documents? Read on…

By far, a passport is one of the most important document for every individual. It’s a proof of their identity that’s required for several purposes - in banks, offices, schools and other important institutions for identification and verification.

Being a key document, before processing any individual’s passport, several other documents are also required for scrutiny & verification, right from birth certificate, address proof and so on.

But what if all these are faked or tampered with ?

Yes, time and again in history there have been cases and big incidents that reported fake identity documents. 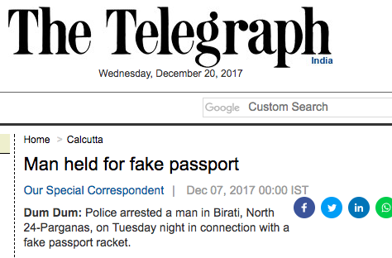 These miscreants are experts at forging key documents like passports, visas, driver’s licenses and several others. They fiddle with the original documents of the existing or deceased people, and using stolen documents get into identity theft.

All documents are so neatly tampered that they even pass the scrutiny by officials.

Countries “enhance” their passports by adding security features like holograms & laser inscriptions but only a few experts in the world are aware of which country added which feature in which year. Without this knowledge one cannot accept or reject a passport just because a laser inscription in the newest passports is missing on a passport issued in say 2015 because this could be a new feature only introduced on passports issued by that country in October 2016.

Such instances keep surfacing with regular frequency and contrary to popular perception, are not just confined to developing countries. Not even the most developed nations have been able to stay clear of the same.

One big challenge is the verification of such documents received in large numbers. Throughout the world over several applications are received for renewal and making of new passports every minute, hence the need is to have a strong and automated capture of information for processing that will need little or no manual intervention to eliminate errors and reduce the processing time. So, the documents will be verified in a blink of an eye and information will be automatically transferred and verified using the system.

And such a system is no dream, but a reality with Qryptal’s secure QR code technology. This enables generation of a unique QR code, which can capture the key details of all important documents and is digitally signed with the private key of the issuer. Refer to the sample below: 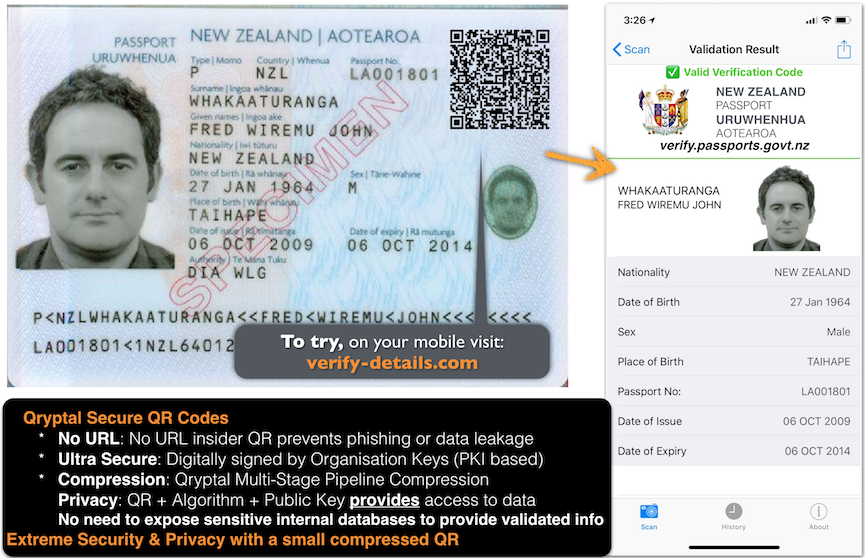 Once the details are stored inside the QR code, they can’t be tampered or manipulated given the technology and security involved in the generation.

Subsequently this information can be verified using a trusted smartphone app or even a server side validation software for bulk verification. Further, with a proper one-time integration, the details can be extracted in a structured form to be used by the processing systems of the verifier or administrator.

Thanks to the new advances made in technology, now a quick scan of the Qryptal secure QR code from an app on your mobile phone can make authentication truly a cakewalk. It is technology like this that can make verification of key documents a breeze and improve trust and confidence in the same.