How can Labs and Testing organisations implement and integrate NABL Mandate on QR Codes ?

Tampered and fake test reports are a global predicament. The problem of fake reports has been seen from Cyprus to Bangladesh, and governments are struggling to integrate document security into test and lab reports.

India’s national accreditation body, National Accreditation Board for Testing and Calibration Laboratories (NABL), has issued notifications that test reports must carry QR codes that can be scanned with a QR scanning application on mobile and other devices. The proposal would prevent the manipulation of documents and test reports.

How are Secure QR Codes different from ‘normal’ QR codes?

Unless the QR code is made secure at the source, bad actors will take advantage of its simplicity and lack of security in their malicious intent to either create fake documents or tamper them by replacing with their own ‘new QR code’ which would defeat the very purpose of preventing manipulation of such documents.

Let us look at some key questions to be answered and factors to be considered when making a decision on incorporating QR codes for such reports and certificates.

Four Questions to consider before implementation

There are four questions to ask yourself before you venture into implementing QR codes for document security and verification in such a scenario.

Lets look at each of these in some detail

Universal scanning (by generic QR readers) for all its advantages has one significant disadvantage - the inability to build security in such QR codes. This may lead to QR phishing posing. Moreover, many of these generic readers capture very sensitive personal data about the user, which is a privacy and security risk.

Scanning with authorised apps delivers remarkably high security, while maintaining the privacy and security. Such an implementation also prevents QR phishing, which is rampant today.

Our recommendation: Go for authorised apps to scan to deliver decentralised verification while providing the highest level of security for your document

The secure QR code technology works offline (through a self-contained code called PDC or primary data code at Qryptal) and online (through extended data codes or EDC). Offline PDC modes work well with laboratory test reports since these reports contain only textual information and are typically valid for a short duration. Hence, they may not need to be revoked or modified, which is a feature that EDC codes can handle. But is usually not required for this

PDC codes work in air-gapped environments, for example, at immigration and border control. The verifier does not need to be connected online to check the document’s authenticity. Thus, such an implementation reduces the burden on your validation server. Moreover, the information is directly available on the document itself in both physical and digital format.

Our recommendation: Offline validation with total security and privacy and which can work even in air-gapped environments unless there is specific requirements which need EDC code.

If ease and speed of implementation with the ability to scale up and down is required, cloud implementation is the go-to option. You would save on complexity of managing infrastructure, saving upfront investment in hardware & other costs, and IT personnel and support.

However, you could do on-premises deployment and optimise your infrastructure if you already have a well established IT infrastructure and personnel to manage new systems such as QR code generation and integration.

Our recommendation: Cloud implementations help you start small and scale-up.

With constantly changing needs of the industry and the rising cases of fraudulent documents, the verifiers may randomly look to crosscheck multiple documents and ensure authenticity. If all your reports don’t carry the QR code, there is a good chance that some unscrupulous person can take the non QR coded report & modify it to dupe the authorities. Once it is known that all your test and lab reports carry your QR (and a secure QR preferably), it is easy for the authorities to verify the authenticity. Hence it is prudent to ensure Secure QR codes across all the documents you generate, rather than limit yourself to specific categories of reports.

Our recommendation: Have secure QR on all reports and certificates instead of being selective. 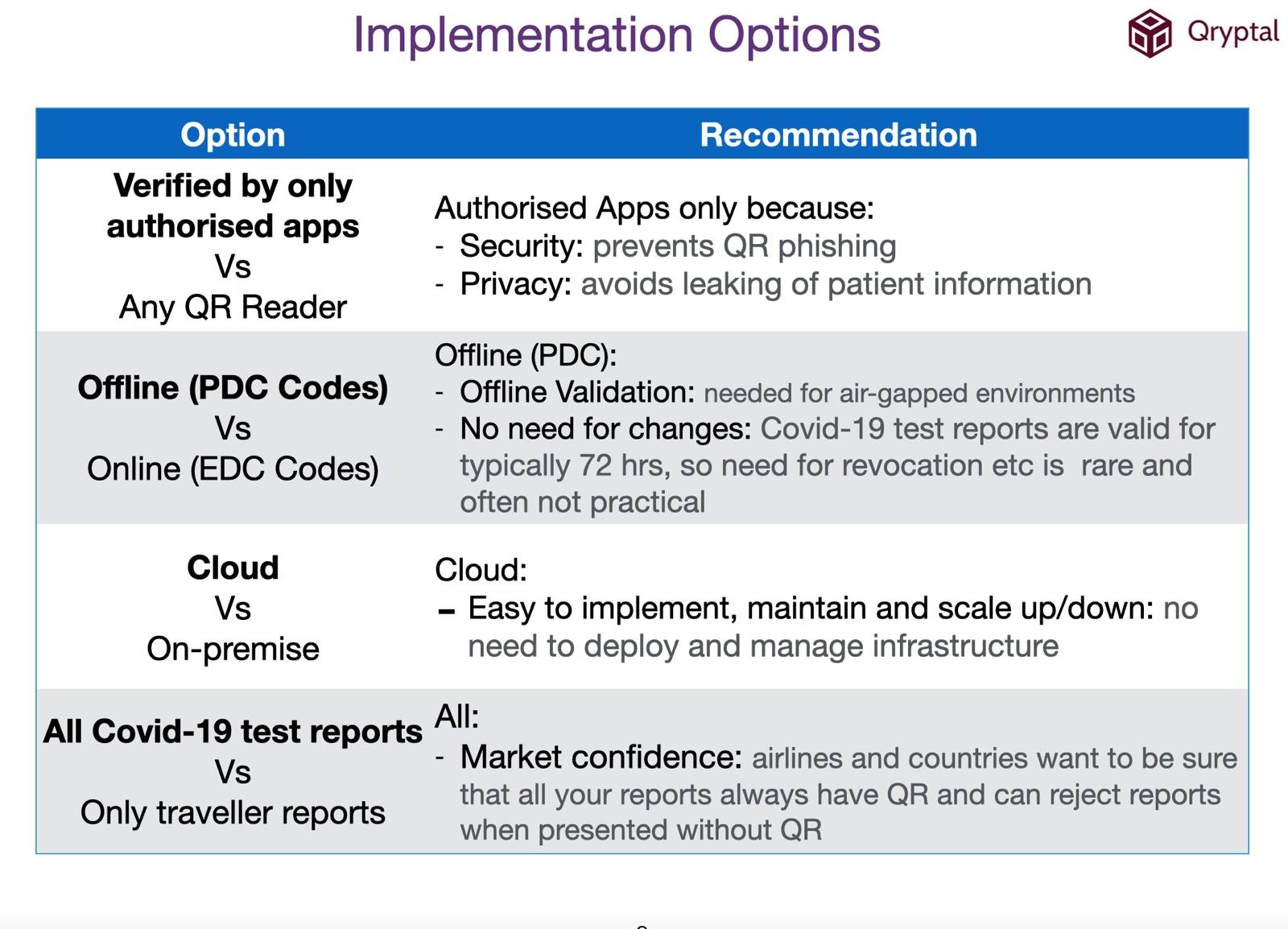 A Sample checklist to consider before implementation of QR Codes

There are a few integration options available 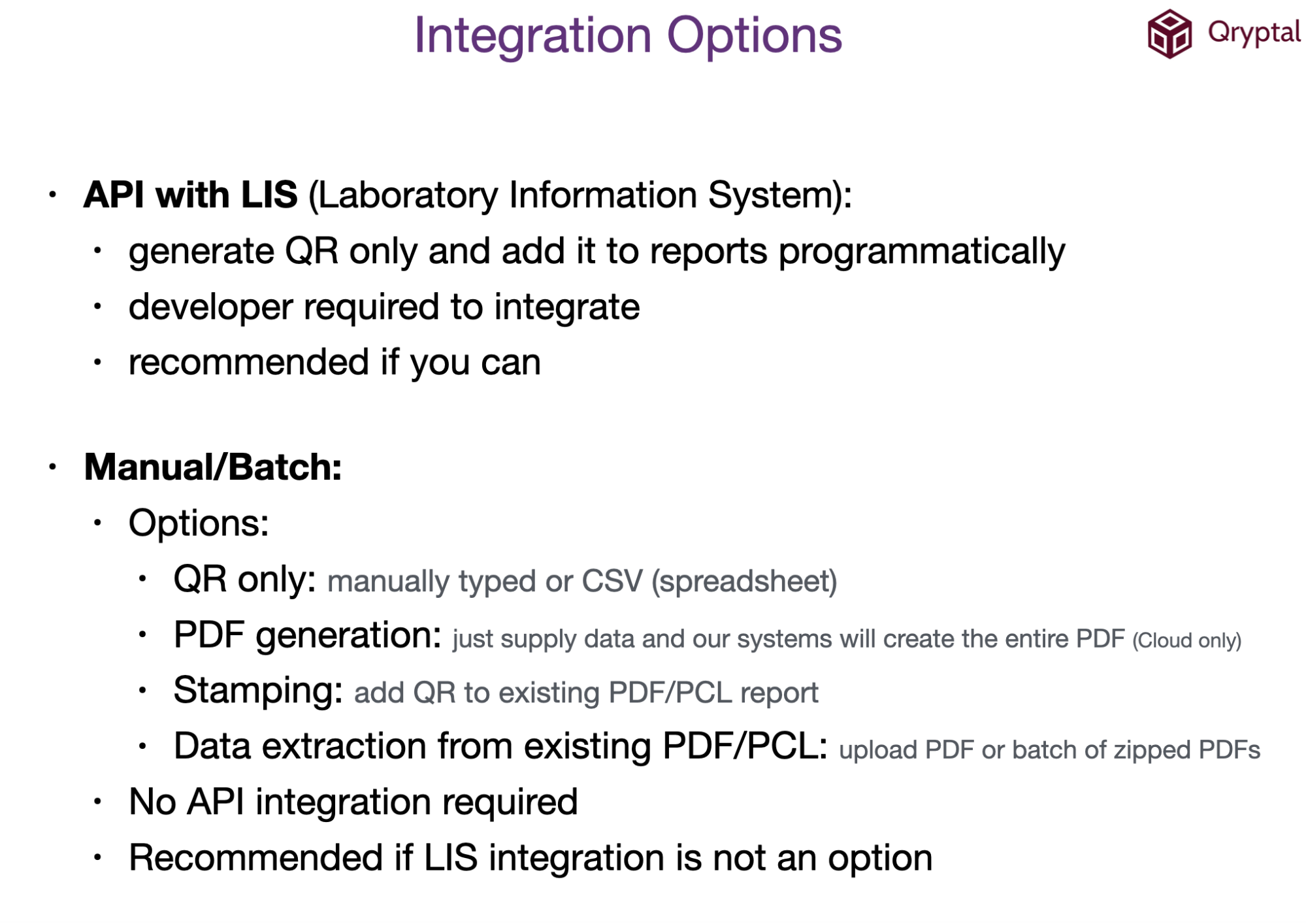