Fake Degrees Being Sold All Over The World - Cause of Increased Incompetence ?

How often do we notice incompetent people occupying important positions across the government and private sector just because of abuse of power, links with the higher officials, nepotism etc ? Yes, that’s quite prevalent, especially, in the developing countries. More often than not, these people also tend to have fake degrees that have been obtained just for becoming eligible for the said posts . Well, that’s a crime to begin with and it leads to bigger problems in the society. Nevertheless, fake degrees are sold all over the world and it has become a lucrative business that yields millions of dollars every year.

A recent spree of fake degrees being sold online highlighted the helplessness of the Scottish government and was covered in a news story published on Study International. The report points out the Scottish Government is losing control over online spread of the fake degrees that purport to be legitimate documents certifying qualifications offered by reputed Scottish educational institutions. 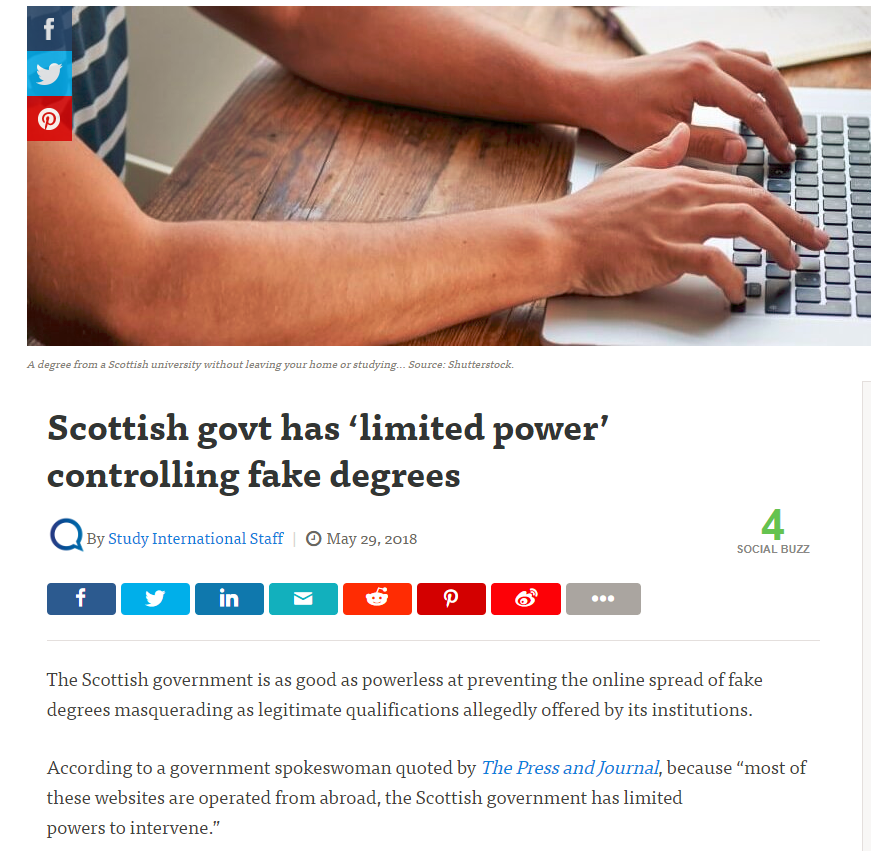 A government spokesperson was of the opinion that in most of these cases, the seller or the websites offering these fake degrees operate from abroad and that leaves the Scottish government with limited intervention powers to bring the culprits to justice. She added, however, that they’ll be working with the government of UK and several others for disrupting such activities.

Earlier this year, another similar report from BBC news revealed thousands of fake degrees being bought by UK nationals from a ‘diploma mill’ operating out of Pakistan. According to the report, the buyers included NHS consultants and nurses as well. It also highlighted that a single buyer had spent £500,000 just on getting the bogus documents for the process. 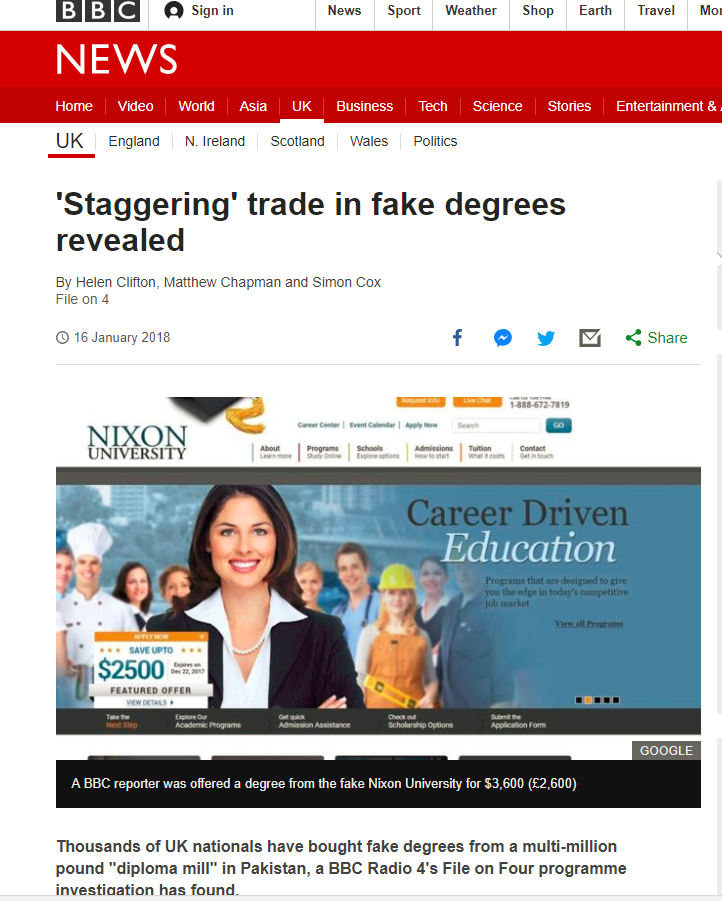 The report also revealed a consultant working at a London teaching hospital who bought an internal medicine degree that was supposed to be from Belford University. Some of the incidents mentioned in the article happened back in 2007 which only goes to show that this activity has been ongoing with hardly any significant efforts to tackle the menace.

In India, The Times of India reported another such incident in January 2018 where Delhi police busted a fake degree racket that was operating through an education society and had regional offices set up in other parts of the country as well. Operating with more than 40 agents, the forgers had sold more than 50000 certificates and mark sheets from different school boards and universities. 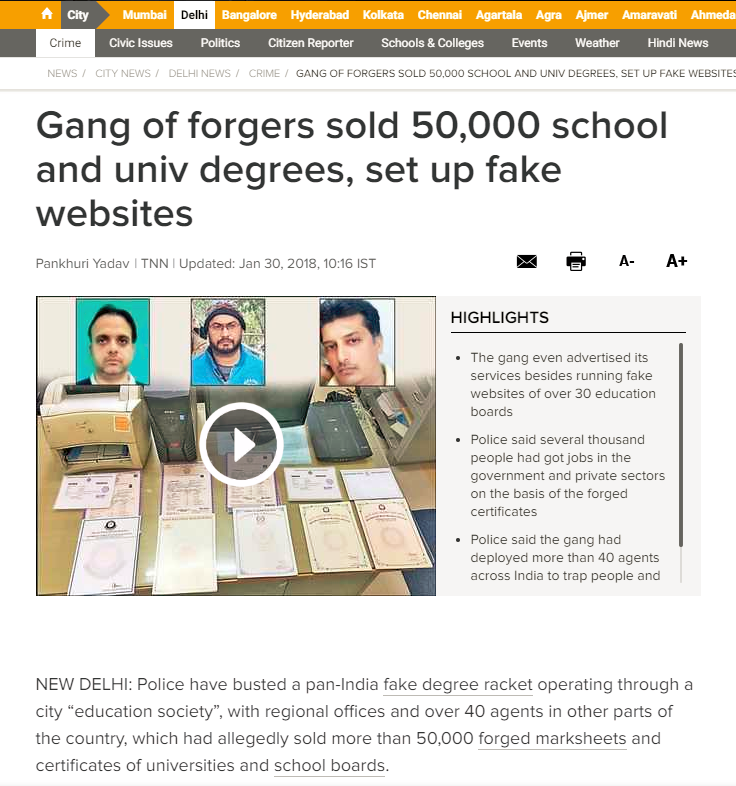 Reportedly, the gang was not just advertising its services but was also running more than 30 fake websites of different education boards in the country !!

With fake degrees being openly sold all over the world, it has caused a headache for genuine candidates and employers and could also be responsible for increased incompetence in both government and private sector. Something needs to be done to counter this at a large scale. Thankfully we have modern technology getting smarter and more convenient to use than ever and we should take its help to reduce such document fraud. A viable solution would be Qryptal’s secure QR codes that can be placed on the degrees and certificates issued by the original institutions. These can then be scanned and used to verify the documents on demand whenever needed. An example of such a document is given below. 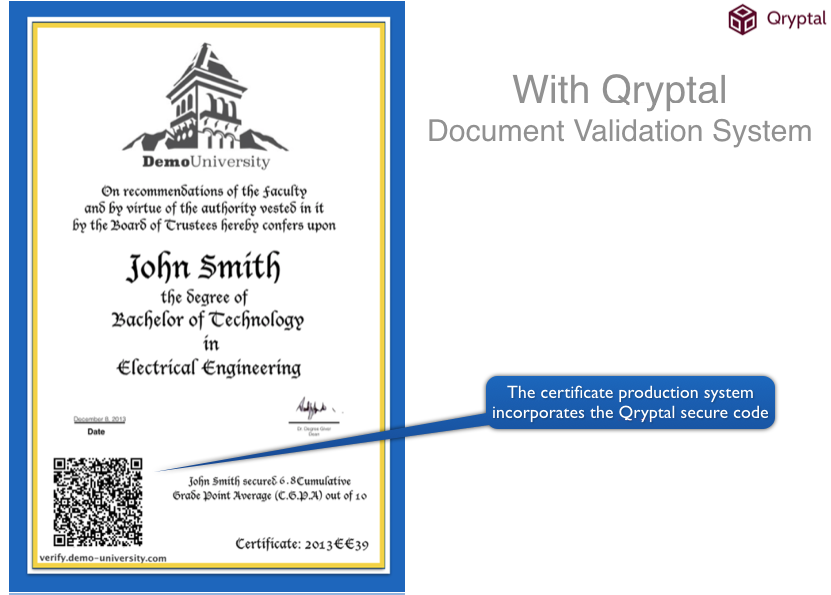 It is obvious that some serious steps need to be taken on a large scale to stop such fraudulent and illegal attempts forever and bring a culture of merit, transparency and trustworthiness in our society. Modern and proven technology can be a big help in this respect.