One of the biggest new-age challenges for any tax authority in any country is surprisingly not related to the tax collection. The tax authorities are today fighting a battle against identity theft, where their identity is used by scammers to make tax-payers part with their details and finally skim them of money, under the garb of collecting tax related information or issuing fake refund notices etc.

In a major revelation, the IRS in US has unearthed an identity theft scam email, where criminals use a fake W-8BEN form - Certificate of Foreign Status of Beneficial Owner for United States Tax Withholding and Reporting (form downloads as a PDF) to gain personal and bank identification from taxpayers. Some versions of this scam have apparently been circulating for more than ten years. The IRS issued several warnings about the fraud over the years, including in 2017 and again in 2018, in vain. 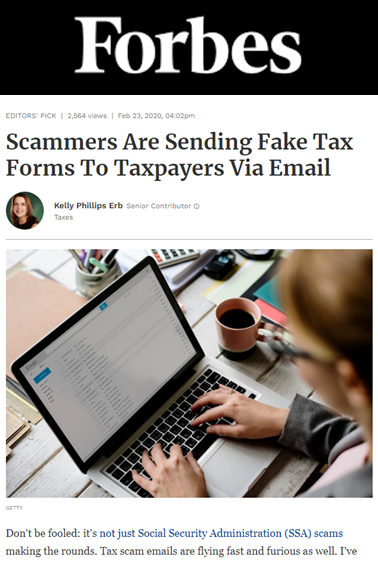 Here’s how it works

The scammers send a letter to a taxpayer stating that they may be exempt from withholding and reporting income tax. However, the letter advises that the taxpayer needs to authenticate their information by filling out and returning the W-8BEN form- only the attached form W-8BEN and accompanying instructions are fakes.

This is a classic ploy used by scammers to encourage taxpayers to share information. 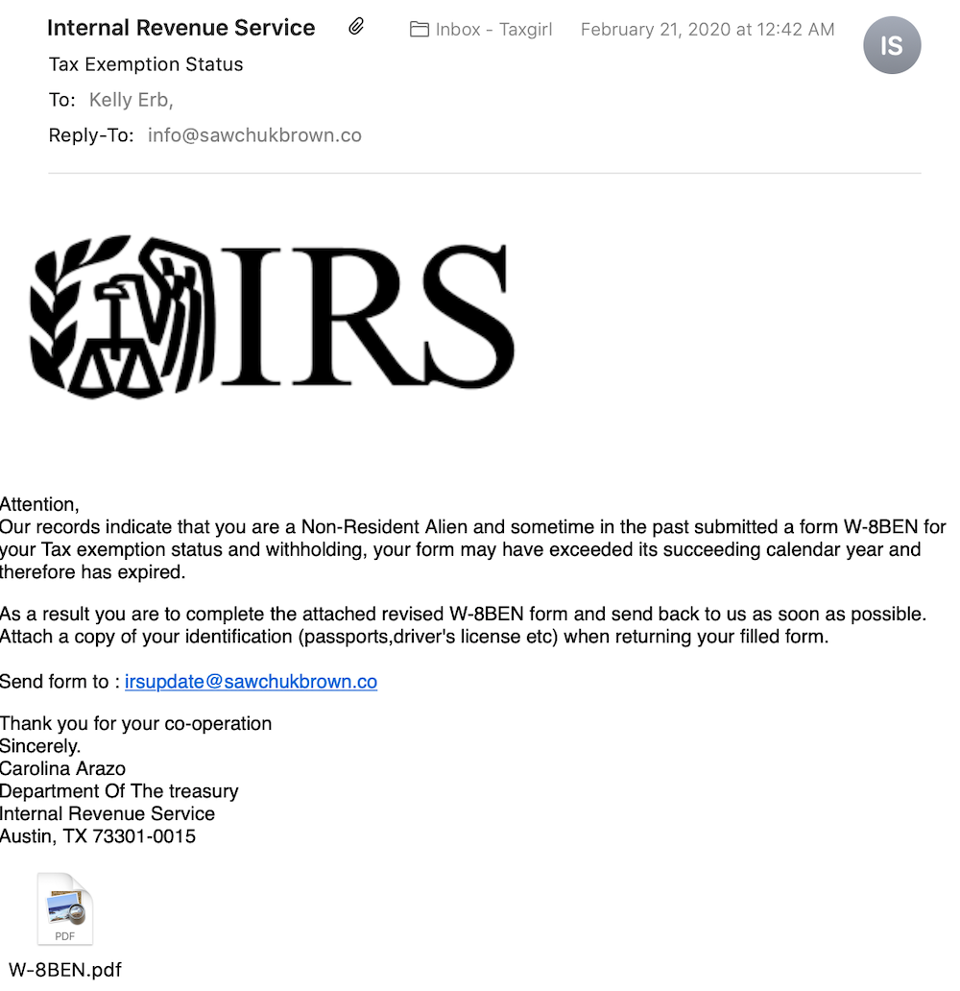 The form W-8BEN is a legitimate tax form. It’s used by non-resident aliens who receive certain kinds of income. It’s typically executed to establish that you are not a U.S. person. For withholding purposes, it may also be used to claim a tax-treaty related reduced rate or exemption from withholding as a resident of a foreign country.

There are straightforward methods to avoid these potential scams and prevent fraudsters from skimming such hapless victims. One way in which this can be done is to ensure that all notices and communication from the income tax department should carry a single secure QR code (with all relevant details) that can be read via an Income Tax authorised mobile App or a web application. These documents would be generated by the Tax department’s centralised systems by authorised means and this will prevent any fraudster from tampering with the communication or forging similar documents. In fact, each document created would be unique and the tax-payer would be easily able to authenticate the document.

The following diagram is self representative. The Secure QR Code can capture information such as Tax Payer’s name, their Tax account number or Tax Payer ID, the document reference number, year of assessment, date of issue and so on. This secure code is tamper-proof and can only be generated by the Tax Authorities. The code can be validated whether the communication is generated in printed or electronic format. 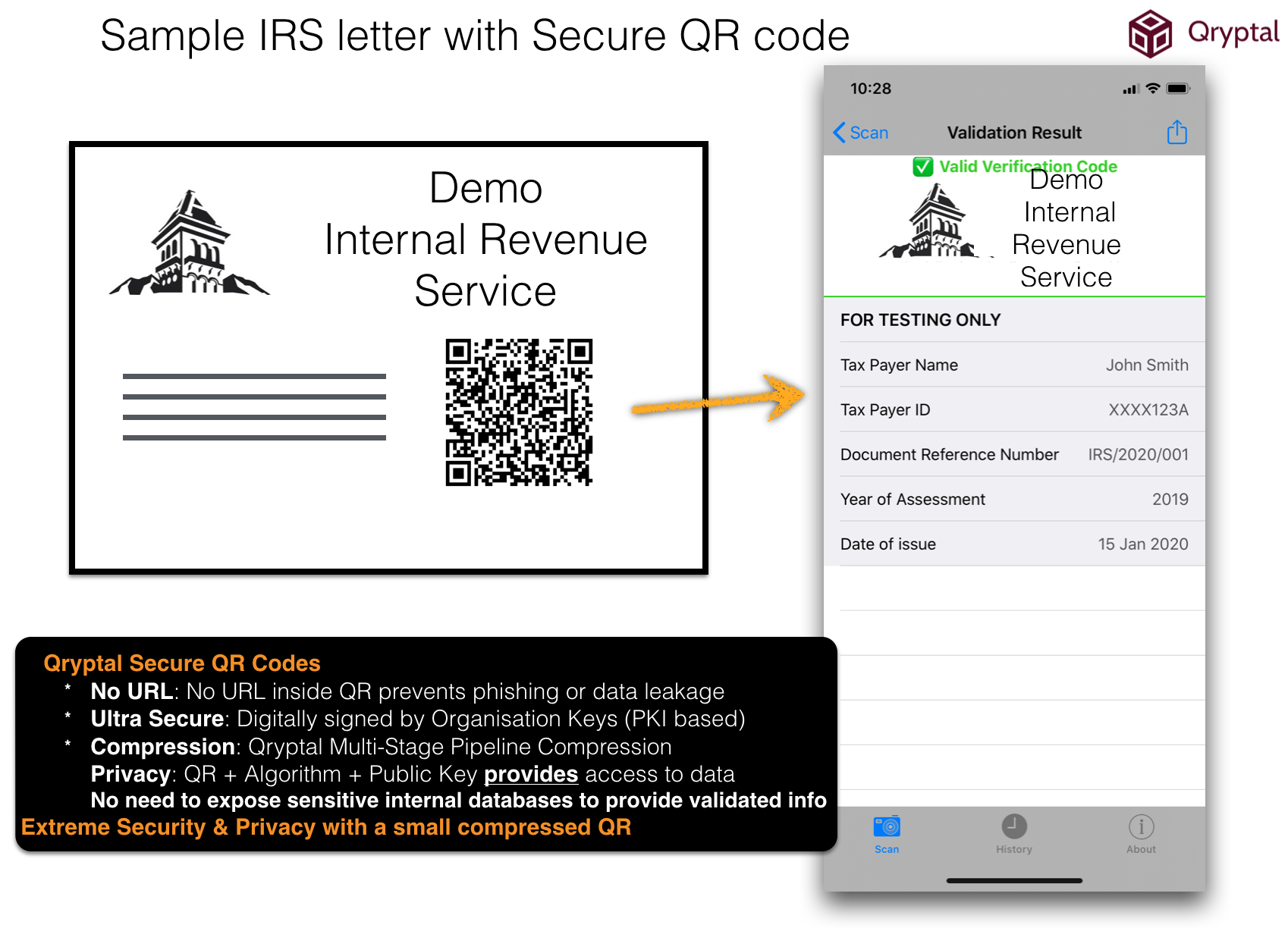 Apart from the generation of the secure QR codes with the help of modern encryption technology, its the ubiquitous presence of smartphones that has made it possible to use an App for easy verification of such documents. In technical terms, in the above Secure QR solution, the mechanism used is PKI where the document at time of generation is signed by the private key of the issuer (the tax authority) and the App carries the corresponding public key for validation. All this happens behind the scenes. The taxpayer would simply scan the QR code and the document is instantly validated. The app used would be an Income tax authority approved App.

This one innovation could potentially allow millions of taxpayers across the USA to have trust and confidence in IRS and its communication. IRS on the other hand, now has the flexibility to streamline its entire documentation generation and distribution process by making every important document secure and instantly verifiable.

An additional benefit would be that once these codes which have been generated for a specific purpose have outlived their utility, the same can automatically expire (valid only upto a specific date) or revoked to prevent misuse. For example, one can have a one time Secure QR code based payment transaction and once that is completed, the same Secure QR code cannot be used for further payments.

A simple, highly secure QR code can and should be used in all official communication (IRS is just one example of a government department) for enhancing customer satisfaction, preventing scams, and improving trust and confidence in the government.

Some other articles which maybe of interest