Mumbai in India is called the maximum city. The city is the commercial capital of India and a microcosm of the country.

When Dongri police arrested a 28-year-old man for allegedly selling fake travel passes, which are allegedly issued by the police, this may not have been a one-off incident. This would be par for the course for many fraudsters who would rush to circumvent the restrictions imposed by most states, cities and towns towards free movement and travel within or outside the areas or inter-state borders. 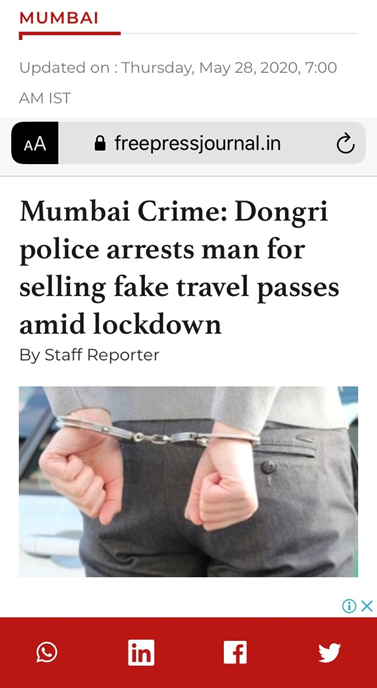 In this case, the accused reportedly charged ₹5000 (US$ 75). A small fee to pay for the flexibility of travel in these testing times. The investigation revealed that the kingpin along with his accomplices printed bogus travel passes supposedly issued by the Mumbai police, Navi Mumbai Police and the collector office of Mumbai and Palghar district and then sold them to those that wished to undertake travel during the curfew and would not get the police permissions on their own merits.

Incidents such as these occur with regularity and it puts the burden of verification on the already stretched police force and other authorities. And such incidents are not only criminal acts of forgery, but they also cause significant impact on the lives of people and put pressure on the regulatory system.

Travel passes or permits have become a norm with the sealing of borders and interstate or intrastate travel. They are an integral part of what is often required, in times of pandemics, curfews or otherwise.

Such a use case of wide distribution without standardisation and security opens up possibilities of fraudulent use of these passes/ documents that would defeat the very purpose of having strict control on the usage. Travel passes, unlike other documents, have a limited shelf life and yet tampered passes can have a huge impact even if done on a small scale. These passes may be issued in one location but may need to be verified and checked by a completely different entity at a location which may not come under the same administrative network. Hence, we need a method for easy and decentralised verification.

How do you issue tamper-proof travel passes that can be checked at any of the checking points?

The solution is simple. A Secure QR code can help to create tamper proof and authentic travel passes which can also be verified easily

Under these circumstances, where it is not a closed-loop verification system, the issuing authority would have a responsibility of issuing passes that are verifiable beyond the network of the issuing authority. It is also important that the solution should not be complex that hampers the movement of vehicles and persons and creates bottlenecks at the checking points in terms of time taken or process to be followed. 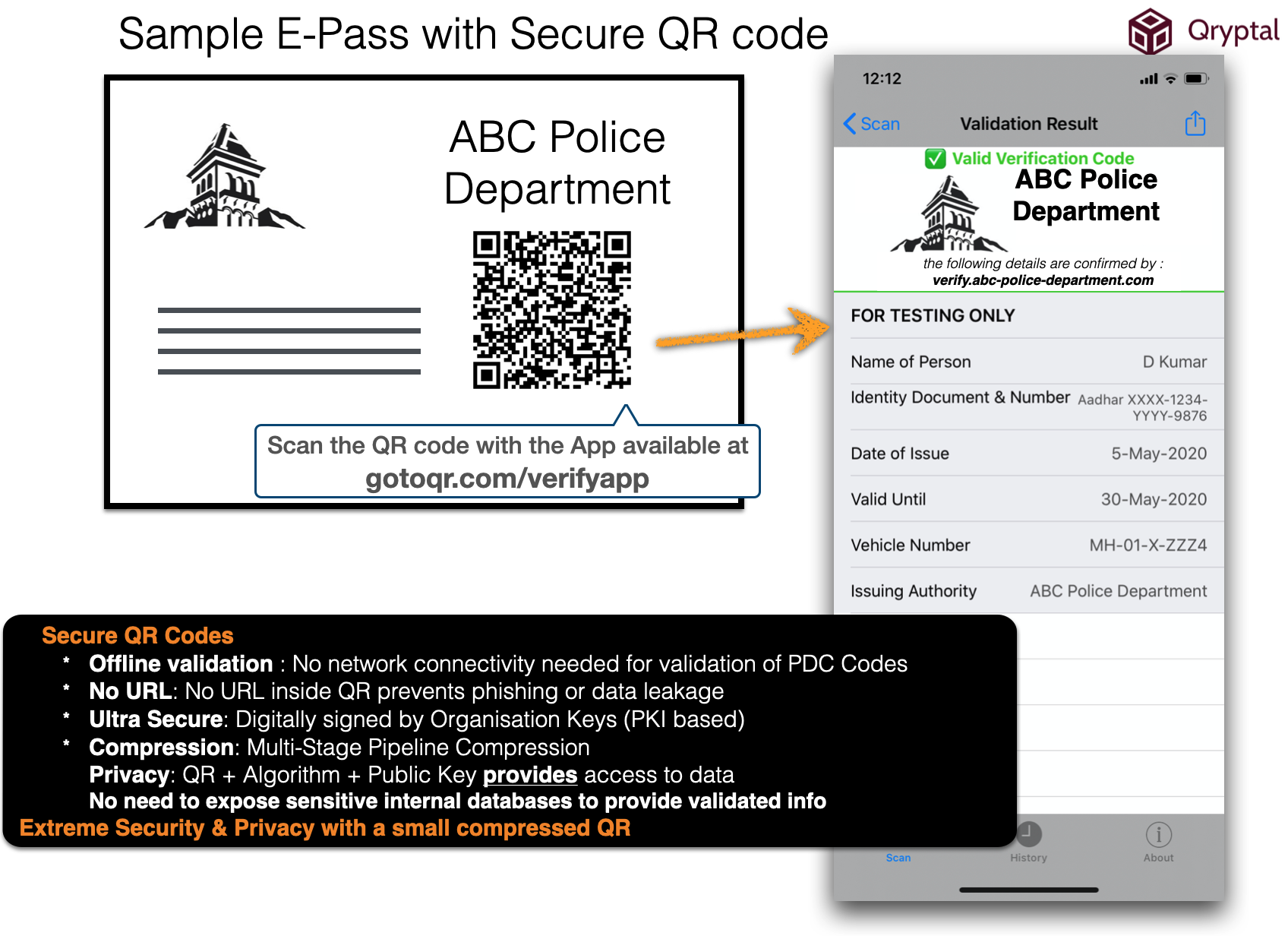 What it essentially means is that the authorities would usually need to look at options which are secure, quick & easily executable, as well as affordable. Hence distinctly complex solutions like holograms or other kinds of watermarks would not work or would be difficult to keep track of and verify. Other alternatives like RFID, hyperledger or blockchain and artificial intelligence become far too complicated to set up, operate and execute in a short span of time.

Secure QR code solutions use smartphone QR code scanning apps which are familiar to users and yet take advantage of a high level of security embedded into the QR code. The issuing authority can generate tamper-proof secure QR Codes which can be printed physically on a paper or an e-pass as the case may be. In today’s mobile-friendly world, these secure QR codes can also be carried and stored on phones as an image or as PDF or similar.

This mechanism of Secure QR code works well for verification across state and district borders without compromising the security of the travel pass. This is a simpler, quick and actionable solution with minimal set-up requirements to prevent scams like what Dongri Police in Mumbai faced