....crores stolen from their bank accounts !

India’s premier medical institute AIIMS fell prey to a banking fraud with ₹12 crores stolen from its bank accounts and attempts made to steal a further ₹29 crores from its other bank accounts with the State Bank of India. In all these cases, the fraudsters apparently used “cloned cheques” over the months of October-November to sweep clean the accounts of the institution.

The fraud cheque leaves presented at SBI’s branches passed UV ray tests. The original cheque leaves with the same series were still in the possession of the institute. This is a classic text-book case of cheque fraud that happens all over the world and yet, many institutions and banks haven’t taken steps to arrest this type of fraud.

“The payments released or stopped can straight away be attributed to the failure of the control mechanism in SBI bank and its branches. Hence, the loss doesn’t pertain to AIIMS,” the AIIMS said in its report. After the fraud came to light, SBI has alerted all its branches and has advised its employees against paying high-value cheques issued by AIIMS, New Delhi. But all this probably was too little, too late. 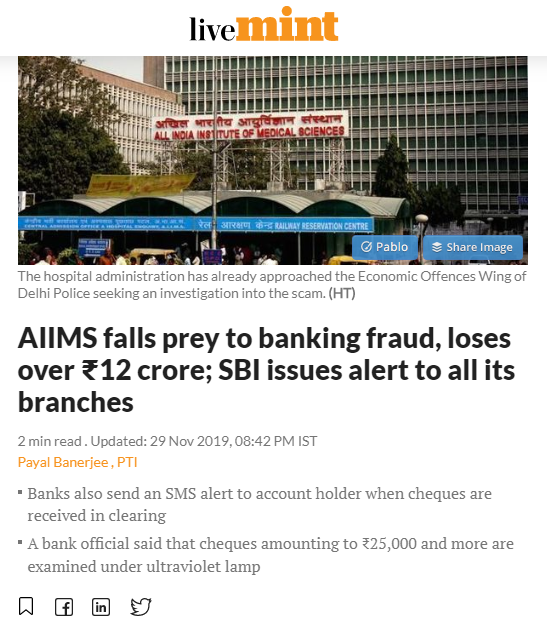 The problem of fake cheques is not new. The scamsters of today use the same technologies, that banks have and use for printing genuine cheques and thus make it difficult to detect such tampered cheques. The automated processing may have improved efficiency but not necessarily the effectiveness. Scamsters thus are able to print/create a fraudulent cheque with the right serial numbers and the MICR codes to get them cleared by image-based clearing and scanning systems without being detected.

In the AIIMS case above, it appears the fraudsters used the running serial numbers from a real cheque book and forged the signatures. These ‘deep-fake’ serial numbers were subsequently cleared for payment in the banking system.

AIIMS and SBI could have avoided this if…

AIIMS and SBI could have avoided this if they had used Secure QR code-based cheque security system. Such a system would add a pre-printed Secure QR Code with details such as cheque number, account number and bank code stored inside. In fact, in the case of printed cheques, which is what institutions like AIIMS may sometimes use, they can as well embed the value, recipient, and date into the encrypted QR code. This innovative technology ensures that the high security, tamperproof QR code can only be created by the authorised issuer/bank.

In this case, each cheque leaf would have a distinct QR code and the machine or human-assisted validation scanner would be able to read the details inside the QR code after verifying its authenticity. This provides a type of assurance that no fraudulent cheque can pass through clearing. This can even be done at the receiving banks itself, before sending the cheques for clearance. Most importantly the QR code is unique for ‘each’ cheque and can only be generated by the issuing bank/ or the authorised institution.

This technology can be easily integrated with the existing infrastructure and can handle the necessary processing volumes. Qryptal QR code for financial services is privacy-friendly with no dependency on databases and zero sharing of customer sensitive information.