And what can Universities do to protect themselves

Why is India’s Modi Government’s HRD ministry worried about a huge fake degree crisis and what could Universities do to protect themselves ?

When the Ministry of HRD (MHRD) of the world’s largest democracy and talent pool - India - started its crackdown on fake degree universities yet again, for the umpteenth time, it only served to emphasise the magnitude of the fake degree problem that has permeated across all levels in the education system in the country. 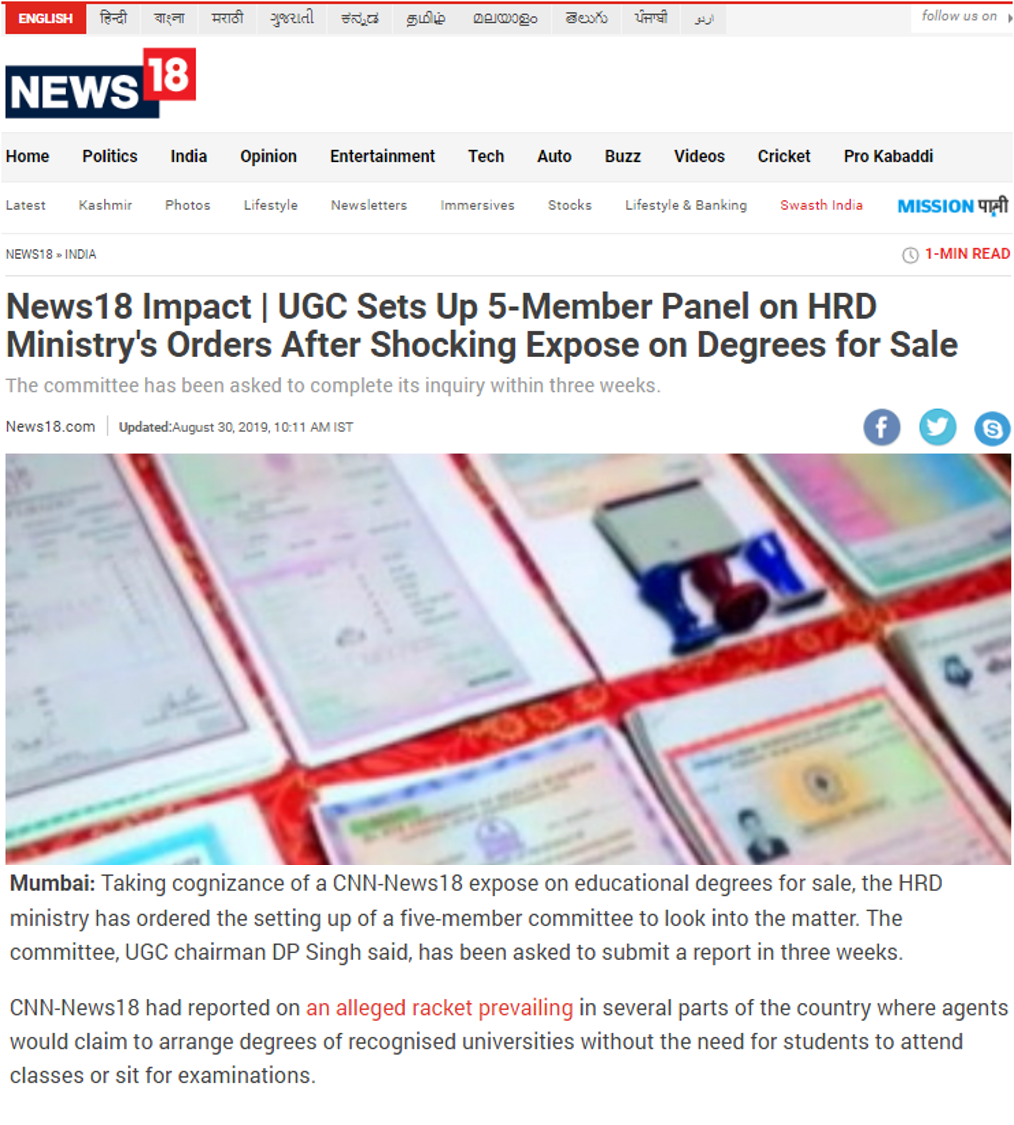 In the expose by News18, it was shown that the degrees of some of the reputed colleges were being sold for a fee by agencies, who were able to issue backdated and false degrees for as low as $1,000-$2,500. This expose is just one of many similar types of education degree fraud that occurs in the world’s largest democracy. Much as India produces tens of millions of bright young graduates each year, the business of degree manufacturing for a fee without proper testing or taking of an examination or without some regulation/oversight, is booming exponentially.

The crackdown by MHRD has set an aggressive deadline of three weeks that ends on September 2019. Whether it would lead to some specific measures coming out, is anybody’s guess. It is equally possible that this entire exercise will just go under a pile of papers like many other such initiatives.

The biggest victim of such scams is the credibility of the educational institution itself. The more reputed the college or university, the more are the chances of such fraudulent attempts to make outright fake degrees or tamper with the information on existing degrees and documents. It further damages the reputation and prospects of genuine students graduating from such universities.

Therefore, it is imperative that irrespective of the outcome of a government investigation and subsequent steps which might take years and decades to fix, the students and alumni of the universities themselves, influence the colleges to ensure that best practices are followed to avoid tampering of mark sheets and forging of degree certificates. With technology at the fingertips and ever-improving forgery methods, today’s scamsters can operate and print ‘original looking degrees’ with a ‘factory’ set up in a small room with just a sophisticated printer and computer. One would never be able to tell the authenticity of such certificates by visual inspection, because these fraudsters duplicate everything from the hologram, parchment paper, fonts and embossings to resemble the original.

What can you do about this?

The all-new, and pervasive QR code technology comes to your rescue in providing a secure document security solution for education. It has extremely secure and rigorous encryption and is easy to implement and use. A Qryptal secure QR coded certificate would thus ensure that the degrees and other such critical education documents are made tamper-proof and can be validated by any third party with a simple smartphone app.

Once universities and their alumni, take up this initiative of strengthening security with document security QR codes, the documents (both electronic and printed ) can become secure. It becomes practically impossible for fraudsters to duplicate such certificates. What’s more, the third-party verifiers being other universities, educational institutions, or even employers are very quickly able to authenticate these documents Hence such scams can be largely prevented.

As a first step, highly reputed universities would need to take immediate steps to ensure that their certificates come with such codes which have the ability for easy and quick validation. Towards that end, Qryptal provides both original document security solutions with QR codes applied at the time of initial generation of the document itself, as well as PDF stamping solutions where the original document (already produced) is stamped with highly secure QR codes. In both these cases, the certificates can be validated and stored both offline and online. These can be validated for the lifetime of such documents thus ensuring a low-cost, effective, secure document security solution for universities and colleges.

How does the Qryptal Secure QR code solution work?

The technology is described here

You can also visit these links: